The Hypnobrai Fang Blade is one of the Four Silver Fang Blades used to unleash the Great Devourer. It was the first of the Fang Blades dug up by Pythor and Skales.

Later, Pythor had the Hypnobrai Fang Blade placed in the Serpentine's underground fortress along with the other two Fang Blades they had found. The Ninja planned to take back the three blades, but were lured into a trap set up by Pythor, who had returned with the fourth Fang Blade. However, the Ninja eventually escaped the trap and took all four of the Fang Blades, planning to destroy them. Unbeknownst to the Ninja, Pythor used his invisibility power to sneak on board the Destiny's Bounty.

Pythor eventually took back the four Fang Blades and made his way to the Lost City of Ouroboros while chased by the Ninja. Pythor then used the four Fang Blades to awaken the Great Devourer. The Hypnobrai Fang Blade was presumably destroyed when the statue of the Devourer crumbled to pieces. 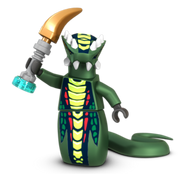 Acidicus with the Hypnobrai Fang Blade (note the error in the blade's color).

Add a photo to this gallery
Retrieved from "https://hypnobrai.fandom.com/wiki/Hypnobrai_Fang_Blade?oldid=4399"
Community content is available under CC-BY-SA unless otherwise noted.